Vista Chinesa is a monument located in Tijuca National Park in Rio de Janeiro. The monument itself is a bamboo gazebo on the ascent of Alto da Boa Vista. In the movie Rio, after Blu and Jewel managed to escape from the smugglers and Nigel, the two found themselves in the middle of the park and were searching for shelter. First, Jewel came across a tall tree and suggested they rest in it. Since he was a bird who had never lived in the jungle, Blu refused to sleep in the tall tree they came upon. Suddenly, he spotted the Vista Chinesa in the distance and told her he would prefer to spend the night there instead, as it was "man-made."

Persuaded by Blu, they decided to rest in the Vista Chinesa. Blu, underestimated by Jewel due to his inability to fly, showed off his acrobatic skills by dragging her along with him to the upper beam of the structure, mocking her in the process. After that, they had a short discussion about flying before Jewel went to sleep.

The Vista Chinesa is also briefly seen during Rio 2 in the daytime, when Jewel flew by with a brazil nut on her way to The Birdhouse.

Vista Chinesa is a scenic monument in Tijuca National Park. The gazebo is famous for its oriental Chinese structural style. With spectacular views of the city of Rio de Janeiro, it has won an award in China as the best Chinese portal outside the country. Tourists and visitors are able to see almost the entire central part of Rio de Janeiro, including Leblon, Ipanema, Jardim Botânico and Copacabana.

In the 19th century, Emperor Joao VI brought Chinese Macao to develop tea production in Brazil. This attempt was a failure: it seemed that either the Brazilian soil was not suitable for the production of quality tea, or the imported Chinese labor did not have the expertise for such a production. It was therefore abandoned in favor of coffee; a more profitable business. The Chinese laborers were therefore employed to construct the road that goes from the botanical garden to Tijuca Park. The Chinese pavilion in the gazebo is a relic of that era. A little further up is the Mesa do Imperador (Emperor's table), another gazebo where, it seems, emperors often came to rest and enjoy the magnificent panoramic view. The Vista Chinesa (Chinese Belvedere) is further away and more isolated than the others; it is safer to go there in the daytime.

"Who's dragging whose butt now?"

"I can't believe I have to drag your clumsy butt up there."

"This is where our kind naturally lives." 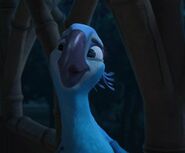 "Flying is... Freedom and not having to rely on anyone!"

As seen in Rio 2
Add a photo to this gallery

As seen in real life

Add a photo to this gallery
Retrieved from "https://rio.fandom.com/wiki/Vista_Chinesa?oldid=108587"
Community content is available under CC-BY-SA unless otherwise noted.