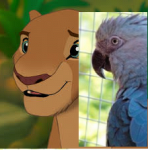 This user is now semi-active due to helping others on another wiki. Please consult another moderator, admin, or the site's Bureaucrat.

I am a HUGE fan of Rio. I am also an experienced bird owner. I have a Cockatiel parrot, Caique parrot, and an Amazon parrot. I have been a member since late 2013 and also owned birds since December 2011.  If you have any Pet bird or Rio questions let me know.

I joined this wiki because I enjoy Rio and I wanted to help the Rio Wiki community. My goals on this wiki are to be an active, respectful, and keep this website in a good condition as possible.

I have done A LOT but not as much as a few users. I've made many more edits since 2015 compared to when I first came, I participated for 136 days in a row on record, and I'm trying my hardest to earn Bird Of Rio badge.

If anyone did not answer the kid one yet and voted the others, feel happy to do so. Also, I want as many users to vote my polls!

Other Movies She Likes

Movies I want to see next year:

Other free time things I love to do:

I love spending time with Stich. However Simchah and Kiki won't go to me because she is so shy around almost everyone. I like to go to the mall, Petsmart, Petco, Barnes and Noble, and Ulta. I like to go outside in 70-80's's weatther (I'm sensitve to cold AND hot). I have two other pets, Delta and Auora. Delta is a shy cat so she does not like birds so much. But when I pet her she's sweet as long as I go slow. Auora, on the other hand is an American Eskimo! She loves to play, and ignores the birds. I love to swim, I found a place that's not crowded for covid-19 to swim in this summer!

How I found out I was auto confirmed.

A gift from LadynGunderfan. I really apperciate this present

I have some new ideas:

Simchah
Add a photo to this gallery

Conservationists are not the only ones that can help. Buy rain forest safe wood and paper. Don't get a wild caught parrot. Donate to conservation groups and zoos. If you see an endangered parrot in a pet store (regardless captive bred or not) give it to a conservation center or zoo for breeding. Don't breed for yourself, it is very hard to do for even advanced parrot owners.
Retrieved from "https://rio.fandom.com/wiki/User:SpixNala101?oldid=110586"
Community content is available under CC-BY-SA unless otherwise noted.