Rio Wiki
Register
Don't have an account?
Sign In
Advertisement
in: Rio, Rio 2, Characters in Rio,
and 16 more

Tiny (also known as Green Bird in Rio) is a Baby Sphere aka "Sphaera Minimus", also know and one of the patrons of Nico and Pedro's samba club. When Mauro and his henchmen interrupted the birds' dancing, she was scared, "hiding" between Kipo's feet, and proclaiming meekly, "I don't know what's going on here!" After the birds' battle with the monkeys, she tried to fly away but was captured and interrogated by Nigel to tell him where Blu and Jewel were headed. After she told him that he was nice and handsome, Nigel threw her at Mauro's head, knocking him out as he was rising to his feet.

In Angry Birds Rio's Smuggler's Den level, it seems that she and/or her relatives are captured in cages.

She is briefly seen in Rio 2 babysitting Bia, Carla, and Tiago, but they tied her to a firework out of mischief. When a thrown match ignites a small ember on Blu's tail, setting off the fireworks, Blu unties her just before it launches, but accidentally gets caught himself, promptly launching himself into the night sky with the firework, getting scorched when the firework goes off, landing beside Jewel, Carla, Bia and Tiago which were perched on the arm of Christ the Redeemer's statue.

Befitting her name, Tiny is very small and short, with a rounded body. She has large, brown eyes, and a bright green upper body, and a fading green color on her lower body, with a few feathers sticking up on her head.

Timid and a little cowardly, Tiny is also quiet and jumpy. She is quite meek and usually hides from conflict. She isn't a very responsible bird, allowing Bia, Carla, and Tiago to tie her to a rocket and allowing them to handle fireworks and matches. She doesn't think before she speaks sometimes.

Tiny coming out after the brawl at the Samba Club.

"Where are the cerulean birds?" - Nigel 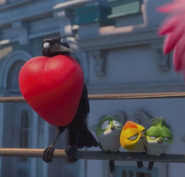