Spix's Macaw (Cyanopsitta spixii) is the only member of the parrot genus Cyanopsitta. Their current conservation status is critically endangered and possibly extinct in the wild (IUCN 3.1) [1] The species is conserved through several breeding programs. It was found in Brazil, in parts of the Brazilian state of Bahia. It has a very restricted natural habitat due to its dependence on Carabeira (Tabebuia aurea) trees for nesting. In the 2011 animated movie, Rio, the main characters Blu and Jewel are the last pair of Spix's Macaws in the world. The movie even references their extinct-in-the-wild status. Although it refers to the species as Blue Macaws (instead of Spix's Macaw), the taxonomy is confirmed by Tulio who mentions their Latin name (Cyanopsitta spixii). People believed that there are only two left in the world, that's Jewel and Blu.

Spix's Macaws are 55–57 centimeters (21.5–23.5 inches) long. Their body colors consist of various shades of blue, including a pale blue head, pale blue underparts, and vivid blue upperparts, wings, and tail. The underside of the wings and tail are black. They have a bare area of grey/black facial skin which sometimes fades to white when they are juveniles. The beak is entirely black except for juveniles which have a white stripe down the center of the beak. The white beak stripe and facial skin of juveniles disappear after 1–2 years. The birds' feet are light grey as juveniles, then become dark grey, and are almost black as adults. Their eyes are dark as juveniles but fade to white as the birds mature.

The mating call of the Spix's Macaw can be described as the sound "whichaka". The sound is made by creating a low rumble in the abdomen bringing the sound up to a high pitch. Its voice is a repeated short grating. It also makes squawking noises.

Although the movie shows a flock inhabiting the Amazon, their natural habitat, in reality, is actually the Caatinga in the state of Bahia, north-eastern Brazil. The Caatinga is filled with desert vegetation like small, thorny trees and cacti. Since the Caatinga is not completely explored, it is believed that there could be Spix Macaws alive in the wild. They are believed to have inhabited only this biome.

As of 2010, there are approximately 85 Spix’s Macaws in captivity. Seventy-three of these are participating in an international breeding program managed by the Institute Chico Mendes of Biodiversity Conservation (ICMBio), the Natural Heritage Branch of the Brazilian Government. Fifty-six of these are managed at Al Wabra Wildlife Preservation (AWWP), the State of Qatar, which took over the population of Birds International and where a captive breeding program is guiding the Spix’s Macaw a step closer to re-establishment back to its natural habitat in Brazil. In 2002, a spix's macaw named Persley was taken from a home to the Sao Paulo Zoo. Tragically though, he died in 2014, producing no offspring, and no more wild genetic Spix's macaws exist anymore.

As of April 12th, 2015, there are 100 Spix Macaws known to be in captivity. The 100th Spix Macaw was named Centurion to commemorate the success.

In June 2018, the population of the species numbers 158 individuals. In the same year, an agreement signed between the Ministry of the Environment of Brazil and conservation organizations of Belgium (Pairi Daiza Foundation) and Germany (Association for the Conservation of Threatened Parrots) established the "repatriation" of 50 Spix's macaws back to Brazil. It is expected that the animals will be in the national territory in the first quarter of 2019. The Spix's Macaw is expected to be reintroduced into nature by 2021. [3]

By September 5, 2018, the Spix's Macaw has been officially reclassified as "Extinct In The Wild" [4] in Brazil, according to new research done by BirdLife International, uplisting its former status as "Critically Endangered (Possibly Extinct In The Wild)". The remaining headcount of Spix's Macaws is estimated to be 60-80 in captivity [5]. However, another headcount made by the Association of the Conservation of Threatened Parrots, also known as ACTP e.V., suggests that approximately 128 individuals of the Spix's Macaw remain [6] in 2016.

In 2001, the last known picture showing a wild Spix's Macaw near a forest was taken and was thought to be a male that a conservation group released into the wild in the previous year. Since then, the bird hasn't been seen.

In March 2019, 50 Spix's Macaws were transferred from ACTP's breeding facilities in Germany to a new dedicated facility in Curaça, Brazil, which is a crucial step towards their reintroduction into the wild. [7]

Pioneering efforts by Qatar’s Al Wabra Wildlife Preservation (AWWP) to conserve the extinct-in-the-wild Spix’s macaw have achieved a key milestone with the world’s first artificial insemination in the parrot species native to Brazil, under a partnership with a German firm.

Founded by Sheikh Saoud bin Mohamed bin Ali al-Thani, AWWP, which has been a champion in Spix’s macaw conservation for over a decade, holds over 77% (64 out of 83) of the world population of the bird and is actively involved in grassroots conservation in its home country.

Given that a narrow genetic pool is one of the biggest problems for the worldwide breeding programme, as it causes suboptimal fertility in the population, researchers from AWWP together with Parrot Reproduction Consulting from Germany decided to help the species through artificial insemination.

As soon as a female laid her first egg, the team took sperm from a male and immediately deposited it by a micro-capillary tube into the oviduct of the female Spix hoping to fertilize the next egg to be laid before the eggshell would be formed.

"This process was repeated after the second and third eggs were laid as Spix's Macaws are known to often lay four eggs in a clutch,” Dr. Tim Bouts, director of AWWP told Gulf Times. After seven days the eggs were candled to see if they were fertile. Two - out of the seven artificially inseminated - proved to be fertile and developed well in the incubator.

The eggs were checked daily for development and as the chicks were growing their heart rates monitored in the egg until they hatched after 26 days. The first chick to hatch was called ‘Neumann,’ named after veterinarian Daniel Neumann, from Parrot Reproduction Consulting, the executor of the first successful artificial insemination in Spix's Macaws.

"I have performed many artificial inseminations in parrots over the years but none have been as special as the ones in the Spix,” he said while recalling that as a boy, following the sad story of the disappearance of the Spix’s macaw in the wild, he dreamt about becoming involved in its conservation.

This success story is hopefully the beginning of the recovery of the species in the wild as successful breeding in captivity with a wide genetic pool will be the most important tool for its survival.
The blue macaw co-coordinator in AWWP, Dr. Cromwell Purchase, said: “Since we know that artificial insemination is possible in this species, we have a lot more possibilities for breeding as we can use different males and females to make up the best possible genetic combinations.”

"We need to kick-start breeding and possibly artificial insemination in their native country as soon as possible. We are also looking to set up our own breeding facility and send some birds from Qatar to Brazil.”
AWWP, well-recognized and respected globally for its focus on breeding and protecting threatened species, is non-commercial and not open to the public. A member of the European Association of Zoos and Aquaria, AWWP has so far this year bred four Spix’s macaw chicks, including the two conceived by artificial insemination, of three different mothers.

AWWP, which owns 2,380 hectares of prime Spix’s habitat near the town of Curaçá in the Caatinga in Brazil, is involved in habitat restoration to prepare the area for reintroduction of the Spix’s macaw in the wild.
AWWP spends over 1 million Qatar Rials annually for Spix’s Macaws' conservation in Qatar and Brazil.

Brazilian official recognized that the birds are privately owned which they gave them away to undergo the program at Loro Parque in order to get the number of the population to a good sustainable level (as it is mentioned at the top of the page, it's critically endangered).

The location of the facility of Spix's Macaw rehabilitation on Tenerife Island, Spain is classified to the public and media. However, the macaws are also put on display at Loro Parque Theme Park. Its Wikipedia page is accessible here. 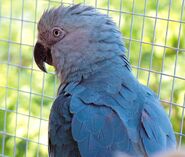 Recently, a lone Spix's Macaw was spotted in Brazil and rediscovered flying in a tree. The discovery was made by a 16-year old girl named Damylis, after her grandfather, Pinpin Oliveria died at 94.[8]

Retrieved from "https://rio.fandom.com/wiki/Spix%27s_Macaw?oldid=108486"
Community content is available under CC-BY-SA unless otherwise noted.