The Red-crested cardinal (Paroaria coronata), as the name suggests, gets its common name from its distinctive red head with a prominent crest. Adults' average body size is around 7.5 in (19.05 cm) with dark grey dorsal plumage, a white neck and underparts, and a bright red head, crest, and upper breast. Their bills are silver-grey and their legs are dark grey. Juveniles appear very similar to adults but instead feature an orange head crest and upper breast.[1]

The Red-crested cardinal is found throughout the mid-section of South America, covering southeastern Brazil, eastern Bolivia, Paraguay, Uruguay, and Argentina. In the wild, they inhabit semi-open environments with scattered trees and shrubbery, especially near water. The species was also introduced to the Hawaiian Islands around 1930.[1]

During the annual breeding season, birds stay exclusively in pairs. Male and female will maintain continuous contact through vocalizations.

The Red-Crested cardinal breeding season is between October and November of each year.[2] After mating, a pair will collaborate with nest-building using small organic materials such as sticks, pine needles and pliable twigs, finalized by hemp string cut into 2 inches lengths and unraveled scattered about the flight.[2] A female cardinal lays 2-5 eggs per breeding season which hatch within 12-13 days of incubation. [1] Juveniles leave their nest 2-3 weeks after hatching.[2] 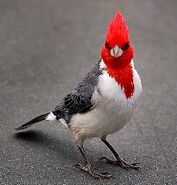 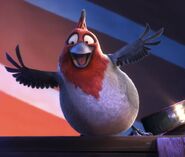 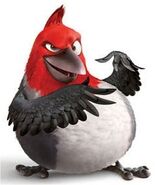 Pedro in the movie teaser trailer for Rio 2