Rio Wiki
Register
Don't have an account?
Sign In
Advertisement
in: Cast and Crew, Movie Star, Rio 2,
and 3 more

Natalie Morales-Rhodes (born Natalie Leticia Morales; June 6, 1972) is an American journalist working for NBC News. She is the Today Show West Coast anchor and appears on other programs including Dateline NBC and NBC Nightly News. She is the voice of a female news reporter - reporting of the discovery of the remaining Spix's Macaw in the Amazon Rainforest made by the ornithologist Tulio Monteiro and his assistant Linda Gunderson - in Rio 2.

In August 2016, after the Rio Summer Olympics, Morales moved to Los Angeles, where she became both the Today show's West Coast anchor, Billy Bush's replacement as host of Access Hollywood and Access Hollywood Live, while continuing as a correspondent for Dateline.

Morales was born in Taiwan, to a Brazilian mother, Penelope, and a Puerto Rican father, Lieutenant Colonel Mario Morales, Jr. She speaks Spanish and Portuguese and spent the first eighteen years of her life living in America and overseas in Panama, Brazil, and Spain as a "U.S. Air Force brat". She graduated in 1990 from Caesar Rodney High School located in Camden, Delaware.

She began her on-air career at News 12 – The Bronx as the first-morning anchor under News 12 - The Bronx’s first News Director Roberto Soto and original Studio Directors Tom D’Elia, Brian Webb, Darryl Stith, and David Rein. She also served as a camera operator, editor, and producer for that network.

Morales went on to serve as a weekend anchor/reporter and morning co-anchor at WVIT-TV in Hartford, Connecticut, where she reported on the Columbine shootings, Hurricane Floyd, the 2000 Presidential election and the September 11, 2001 attacks. She also co-hosted and reported for the Emmy-nominated documentary, Save Our Sound, a joint production with WNBC on preserving the Long Island Sound. In 1999, she was voted one of the 50 Most Influential Latinas for her news coverage and reports by the Hispanic daily newspaper El Diario La Prensa. Previously, Morales spent two years working behind the scenes at Court TV.

Morales was an anchor and correspondent for MSNBC from 2002 to 2006. She covered a number of major news stories there including the 2004 Presidential election, the 2004 Summer Olympics in Athens, Greece, the Iraqi prisoner abuse, Operation Iraqi Freedom, the Space Shuttle Columbia disaster, the Northeast Blackout of 2003, the 2002 Beltway sniper attacks and the investigation and trial of Scott Peterson. Additionally, she was named one of Hispanic Magazine’s Top Trendsetters of 2003.

Morales joined the Today show in 2006 as a national correspondent and was named co-anchor of the third hour of the show in March 2008. On 9 May 2011, it was announced that Morales would replace Ann Curry as the news anchor for Today, when Curry succeeded Meredith Vieira as host of Today in June 2011.

Morales married Joseph Rhodes on 22 August 1998. In 2002 they purchased a $1 million USD turn-of-the-century townhouse in Hoboken, New Jersey, and expanded it in 2008 to 3,600 square feet. In June 2016, after Morales was made the Today show's West Coast anchor, the family put the Hoboken townhouse on sale and moved into a house in Brentwood, California the following month. By October, the townhouse had sold for $3.1 million USD.

In early 2004, Morales' son Josh was born via C-section at Hoboken's St. Mary Hospital. Their second son, Luke Hudson, was born in late 2008.

Morales is an avid runner, having competed in five marathons, including three New York City Marathons. Morales also participates in triathlons. She has been featured in a full-length article and on the cover of the October 2010 issue of Triathlete Magazine. 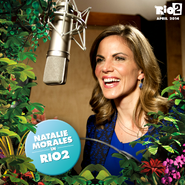