Rio Wiki
Register
Don't have an account?
Sign In
Advertisement
in: Locations in Rio, Rio, Filming locations,
and 7 more

Moose Lake is a town in Carlton County, Minnesota, United States of America. This is where Linda Gunderson lived and raised Blu for the first 15 years of his life, and where the book store, Blue Macaw Books was formerly located before they moved to Brazil. The reason why the setting was picked is that Don Rhymer, one of the movie's screenwriters, grew up in Moose Lake, Minnesota.

Blu and Linda left Moose Lake to live in Rio de Janeiro in the movie Rio.

Interstate 35; Minnesota State Highways 27 and 73; and County 61 are four of the main routes in Moose Lake.

Moose Lake State Park is nearby.

The boundary line between Carlton and Pine counties is nearby.

Moose Lake was one of the communities affected by the massive 1918 Cloquet Fire. The Minneapolis, St. Paul and Sault Ste. Marie Depot is a museum that tells the story of that fire. The Minnesota Home Guard provided assistance to the area following the fire.

There were 648 households of which 24.4% had children under the age of 18 living with them, 33.2% were married couples living together, 11.6% had a female householder with no husband present, 4.3% had a male householder with no wife present, and 50.9% were non-families. 46.6% of all households were made up of individuals and 27.8% had someone living alone who was 65 years of age or older. The average household size was 2.01 and the average family size was 2.84.

There were 577 households out of which 25.1% had children under the age of 18 living with them, 38.5% were married couples living together, 9.7% had a female householder with no husband present, and 49.0% were non-families. 46.3% of all households were made up of individuals and 29.8% had someone living alone who was 65 years of age or older. The average household size was 2.03 and the average family size was 2.88.

In the children's video series, VeggieTales, there is an ongoing gag regarding Moose Lake. In the episode, The End of Silliness?, when a petition is made to bring back Silly Songs with Larry, Dr. Archibald reveals to Larry that it was signed by the entire population of Duluth, Minnesota and one citizen of Moose Lake, to which Larry responds, "Moose Lake?", followed by Archibald confirming, "Yes, Moose Lake!" to which Larry says, "Wow, Moose Lake!". The petition in the video is a digitized version of an actual petition drive created by Duluth radio station WNCB (now The Refuge) in response to a reported ending of the "Silly Songs With Larry" segment of the videos.

As mention already the movie Rio features this place during the beginning of the movie.

In Strawberry Shortcake: It's a Meaningful Light, Ginger Snap says that someone was from Moose Lake because of that quote "Every fall, someone from Moose Lake asked me to take care of this!".

As with the rest of Minnesota, Moose Lake has a humid contential climate, Similar to the rest of the northern half of the state it has the warm-summer variety with relatively cool nights year-round. Winter temperatures are very cold but dry compared to summer. The record High in the day was 104 degrees in July in Fahrenheit and Low at night -53.0 in both December and January fahernheit.

Location of Moose Lake in Minnesota

I'll take care of you. 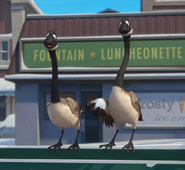 "Well Well If it isn't my favorite nerd bird?