Mauro is the leader of a group of mischievous Common Marmosets who steal from the tourists of Rio de Janeiro, and are experts in Capoeira. He and his minions are forced to work for Nigel and obey all of his orders. He is voiced by Francisco Ramos in Rio.

﻿After a busy day of stealing from tourists (via Mauro performing dance moves to entertain them while the others loot the tourists' bags and pockets for valuables), Mauro and his group of marmosets are seen dancing at their hangout until they are approached by Nigel, who demands that they help him in finding Blu and Jewel. When Mauro asks the angry cockatoo what is in it for them, Nigel carries the marmoset up to a great height and drops him. The terrified Mauro begs the cockatoo to save him. After Mauro promises that he and his gang will help, Nigel catches Mauro when he is a few inches away from hitting the ground. Mauro and his henchmen are then ordered by Nigel to find Blu and Jewel by the end of the day, under the threat of "flying lessons for everyone".

Mauro's minions find the blue macaws, Blu and Jewel, at the Samba Club, and Mauro leads the marmosets in confronting the macaws. Mauro says, "You two are coming with me". Then Jewel retorts, "In your little monkey dreams", and spits at Mauro's foot. After engaging in battle with them and their bird friends, Mauro and his minions lose both the fight and their quarry, plus some of the marmosets are knocked out in the fight. A dazed Mauro is later manhandled by Nigel for failing and says, "Papa?" Then, when Mauro gets up, Nigel throws Tiny at him, knocking him out.

After Nigel is reduced to a featherless mess due to his accident (from a plane crash), Mauro gains his revenge by laughing hysterically and taking a picture of the humiliated and plucked cockatoo.

Nigel forces Mauro and his minions, but instead, they want to go after Blu and Jewel. Mauro is finally attacked in Carnival Upheaval.

A marmoset performing for some humans

Mauro being dropped from the sky by Nigel, who is discussing what he should do with him.

Mauro, falling after Nigel throws him up in the air

"Alright, you twisted my wing. Deal."

Mauro receiving a text message from one of his henchmen

Kipo fretting Mauro after the club stopped partying, with Rafi in the foreground

Mauro while taking a photo of featherless Nigel at the end of the movie. 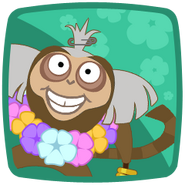 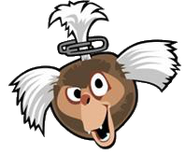