Start a Wiki
Manaus is a location that is featured in Rio 2. It the final city that the Spix's Macaw Family, Nico, Pedro and Rafael pass through before they reach the Amazon Rainforest.

In Rio 2, when Blu and his family travel to the Amazon, they arrive at Manaus, where Nigel is performing for profit for the Carnival Barker. When Nigel sees Blu, he decides to follow him for revenge. They all get in a boat to get across the jungle faster. They are shown crossing the exact place where the rivers Rio Negro and Solimões's meet, showing the beautiful colors that mix in the water.

Manaus previously known as Manaós before 1939 and formerly Barra do Rio Negro, is the capital city of the state of Amazonas in the North Region of Brazil. It is situated near the confluence of the Negro and Solimões rivers. With a population of more than 2 million, it is the most populous city of both the Brazilian state of Amazonas and the Amazon rainforest.

The city was founded in 1669 as the Fort of São José do Rio Negro. It was elevated to a town in 1832 with the name of "Manaus", an altered spelling of the indigenous Manaós peoples, and legally transformed into a city on October 24, 1848, with the name of Cidade da Barra do Rio Negro, Portuguese for "The City of the Margins of the Black River". On September 4, 1856 it returned to its original name.

Manaus is located in the middle of the Amazon rainforest, and access to the city is primarily by boat or airplane. This isolation helped preserve both the natural environment as well as the culture of the city. The culture of Manaus, more than in any other urban area of Brazil, preserves the habits of Native Brazilian tribes. The city is the main access point for visiting the fauna and flora of the Brazilian Amazon. Few places in the world afford such a variety of plants, birds, insects, and fishes.

It was known at the beginning of the century, as "Heart of the Amazon" and "City of the Forest". Currently its main economic engine is the Industrial Park of Manaus, a Free Economic Zone. The city has a free port and an international airport. Its manufactures include electronics, chemical products, and soap; there are distilling and ship construction industries. Manaus also exports Brazil nuts, rubber, jute and rosewood oil. It has a cathedral, opera house, zoological and botanical gardens, an ecopark and regional and native peoples museums.

With a population of 2,145,444 people in 2018, Manaus is the most populous city in the Brazilian Amazon area and the 7th most populous in the country. It is located on the north bank of the Negro River, 18 km (11 mi) above the meeting of the rivers where the Negro merges with the Solimões, to form the Amazon proper. Manaus is 1,400 km (900 mi) inland from the Atlantic Ocean. It is the hub of tourism for the rivers, the jungle lodges and the river cruises.

The Solimões and Negro rivers meet just east of Manaus and join to form the Amazon River (using the Brazilian definition of the river; elsewhere, Solimões is considered the upper part of the Amazon). Rubber made it the richest city in South America during the late 1800s. Rubber also helped Manaus earn its nickname, the "Paris of the Tropics". Many wealthy European families settled in Manaus and brought their love for sophisticated European art, architecture and culture with them. Manaus is also a duty-free zone, which has encouraged development in the region. 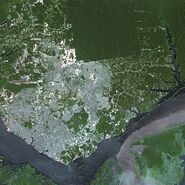 A view of Manaus via satellite.

A view of Manaus from the sea.
Add a photo to this gallery

The city of Manaus, as seen when the Spix's Macaw Family first enter it.

A market at a dock at Manaus.

Blu and Jewel perched on top of the Céu Azul's roof.
Add a photo to this gallery
Retrieved from "https://rio.fandom.com/wiki/Manaus?oldid=102580"
Community content is available under CC-BY-SA unless otherwise noted.