The Red-and-green Macaw (Ara chloropterus), also known as the Red and Green Macaw, is a large mostly-red macaw of the Ara genus, and are easily confused with the Scarlet Macaw, which in contrast, have yellow instead of green on their wings. They are the largest of the Ara genus, and are found in the forests and woodlands of northern and central South America. However, along with other macaws, in recent years there has been a marked decline in its numbers due to habitat loss and illegal capture for the parrot trade.

The Red-and-green Macaw has a very powerful beak which can generate a pressure of 2000 psi and can snap a broomstick in half. This powerful beak has evolved to crush or open even the hardest nuts and seeds.

The Green-winged macaw generally mates for life. The female typically lays two or three eggs in a nest made in a hole in a tree. The female incubates the eggs for about 28 days, and the chicks leave from the nest about 90 days after hatching.

In the wild, these birds eat a variety of foods, including nuts, fruits, seeds, and occasionally vegetable matter. Like other macaws and birds, they eat clay to help digestion.

Red and Green Macaws are common pets, both legally and illegally. Some are gentle and others can be aggressive. Many hobbyists have decided to make hybrids of red and greens and other macaws, such as the Harlequin, Buffwing, Calico, Ruby, Cameo, Flame, Maui Sunrise, Quatro, Tropicana, Rubilina, Jubilee, and Fiesta Macaws.

Aves Argentinas, a partner of BirdLife International is leading the re-introduction of the species in Argentina. The bird which has not been seen for some years and is listed as critically endangered in Argentina was released in Iberá Provincial Reserve (Spanish: Reserva Provincial Iberá) in the north-eastern province of Corrientes. The birds are from zoos and breeding centres in Argentina and were released in 2015.[6] 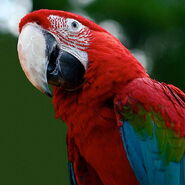 Add a photo to this gallery
Retrieved from "https://rio.fandom.com/wiki/Green_Winged_Macaw?oldid=105479"
Community content is available under CC-BY-SA unless otherwise noted.