The Crimson-bellied Parakeet (Pyrrhura perlata), more commonly known as the Crimson-bellied Conure in aviculture, is a species of parrot in the Psittacidae family. It is found in forests in the south-central Amazon Basin in Brazil and Bolivia. It remains fairly common locally and is consequently considered to be of least concern and IUCN. Its taxonomic history is potentially confusing. Consequently, P. perlata was transferred to this species, while P. rhodogaster became a junior synonym.

Pyrrhura perlata adults are partially green in color. They have yellowish-green cheeks, and gradually transitions to blue on their lower cheeks. Their breast is brown, with pale off-white and dark brown barring. Crimson-bellied Parakeets also have a blue-collar around their hindnecks, varying with each bird. They have a red bend of wing, lesser underwing coverts; blue thighs to tail coverts The tail is brown/red. Pyrrhura perlatas also have a brownish-grey beak, bare and grey eye rings, and dark brown irises. Crimson-bellied Conures weigh about 85-94g.

It was formerly known as Pyrrhura rhodogaster, but following a review, it was discovered that the type specimen for P. perlata, long believed to belong to the closely related Pearly Parakeet, actually was a juvenile Crimson-bellied Parakeet.

These birds are rarely seen in captivity. However, Pyrrhura species are birds with sweet personalities and sometimes okay with a beginner. These birds since they are vulnerable are bred in captivity for conservation more than being pets/companions to humans.

Two Crimson-bellied Parakeets can be seen flying close to Blu's nest when he was a nestling during "Real in Rio". 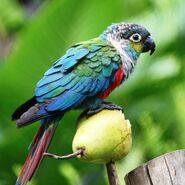 Add a photo to this gallery
Retrieved from "https://rio.fandom.com/wiki/Crimson-bellied_Parakeet?oldid=106248"
Community content is available under CC-BY-SA unless otherwise noted.