The Carnival Barker is a minor human character from Rio 2. He owns a small kiosk in the market at the port of Manaus, Brazil. He keeps Nigel and Charlie as tourist attractions to help him make money. Gabi is also kept in a jar of his as his merchandise. The Carnival Barker is voiced by Bernardo de Paula, who also voiced the Blue Sentry in Rio 2 and Kipo and Sylvio in Rio.

The Carnival Barker is first seen at a fruit stand calling out his "bird of mystery", Nigel, from his small shelter, and tries to find a customer. Meanwhile, to the right of the wooden stand, right in front of his kiosk, Charlie is tap-dancing, and after getting a coin tip from a passing patron, he is seen trying to reach for a jar of ants. The barker immediately sees this and shouts at his tap-dancer, ordering him to keep off the jar and get back to work.

Momentarily, an obnoxious kid walks in front of the kiosk with his mother and notices Nigel in his costume. The boy, wanting to know his fortune, stops by the barker's kiosk, and so does his mother. The Carnival Barker welcomes the boy and his mother. Next, he pulls out the drawer, located under Nigel's shelter, that holds sets of fortune-telling cards, and instructs Nigel, poking him with a wooden stick, to pick one out.

Nigel soon gets distracted by the sight of Blu passing by. Then Nigel stuffs the boy's ice cream cone into his mouth while the barker tries to keep his outraged bird at bay. He attempts to strike Nigel with the stick in his hand, but the strike is blocked by Nigel. The carnival barker is suppressed and counter-attacked by the cockatoo, and is eventually thrown into his kiosk.

The Carnival Barker wears a dark red undershirt and a pair of jean shorts. He has a blue and white cap which says "Manaus" on the white front side. He has tan-colored skin, brown eyes and a short beard and mustache. He has a tattoo on his right shoulder.

He seems to be a very giving character to humans, but can also be forcing to animals (he begged Nigel to pick up a fortune and Charlie not to eat the ants). But he can still get scared, proven by Nigel.

The Carnival Barker prodding Nigel to get him to pick a card. 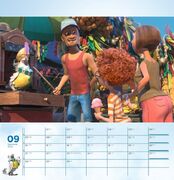 Ditto, but in a calender.

A view of the Market. Note the Carnival Barker and his stall in the center of the picture.
Add a photo to this gallery
Retrieved from "https://rio.fandom.com/wiki/Carnival_Barker?oldid=106424"
Community content is available under CC-BY-SA unless otherwise noted.