Carlos Saldanha is the director of the Ice Age films (excluding Ice Age: Continental Drift) and the Rio films. He was also the voice of Egbert, Yoko, and Shelly in Ice Age: Dawn of the Dinosaurs. In Rio (which he directed), Saldanha also voiced the second waiter when Tulio and Linda were having dinner.

Born and raised in Rio de Janeiro, Brazil [1][2], Saldanha enjoyed a fairly typical childhood that was eventually defined by his passion for animation. Carlos would spend hours perfecting his cartoonish drawing technique, and he quickly realized that he had to move to the States to pursue animation as a career. In 1991, Carlos arrived in New York City to attend the prestigious School of Visual Arts, where he completed two well-received shorts and earned a degree in animation. It was also at School that Saldanha met MFA instructor and future film directing partner Chris Wedge, who invited Saldanha to join Wedge's company Blue Sky Studios. Carlos was immediately put to work as an animator on Blue Sky’s various projects, with the company, in its early days, best known for cranking out commercials and short films. In 1997, Blue Sky began focusing exclusively on special effects and Carlos worked behind-the-scenes on such movies as 1997’s The Fairy Godmother and 1999’s Fight Club.

The company’s (Blue Sky Studios) first release was 2002’s Ice Age, with Carlos, along with his buddy Chris Wedge, tapped to take the directorial reigns on the expensive and ambitious project. The film, which features the voices of Ray Romano, Denis Leary, and John Lequizamo, became an immediate smash and established Blue Sky as a competitive force within the computer animation field. The movie was a success, with an opening weekend gross of $46.3 million, the best March opening ever. After co-directing the 2005 film Robots he broke his previous March opening record with 2006, Ice Age sequel, Ice Age 2: The Meltdown, which Saldanha directed by himself. He would later direct the 2009 sequel, Ice Age: Dawn of the Dinosaurs. Desiring a change of location after directing three films set in icy locales, Saldanha's next project was the 2011 film Rio, which is set in Saldanha's hometown of Rio de Janeiro. Saldanha, who felt that Rio had never been fully portrayed on film, felt a responsibility to travel to the city with the other animators so that they could accurately capture Rio's unique environment and habitats. The movie grossed a reported $484 million worldwide. Rio competed for an Oscar for Best Original Music with music Real in Rio but ended up losing. Due to the success of Rio, Carlos Saldanha works in sequence, Rio 2, which premieres on April 11, 2014, in the U.S.

In October 2012, Saldanha signed a five-year exclusive deal with 20th Century Fox to develop and produce animated and live-action projects. For this purpose, he formed in June 2013 a Fox-based production company, named BottleCap Productions.

Currently, Carlos Saldanha is a director who is directing the film "Rio, Eu te Amo", and be working on the film based on the History of Ferdinand. He is also developing an animated feature film based on Alienology ologies from the fantasy book series, and want to direct a live-action adaptation of Royden Lepp's graphic novel Rust: Visitor in the Field. 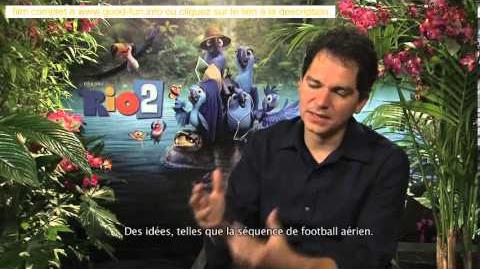 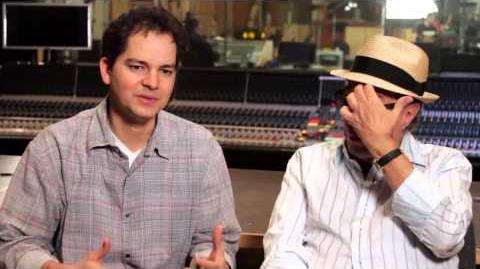 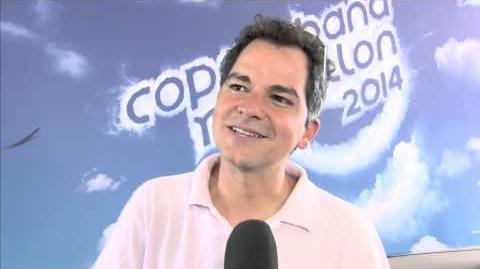 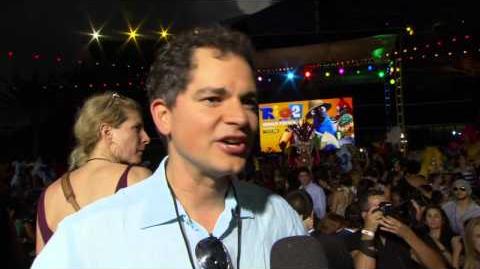 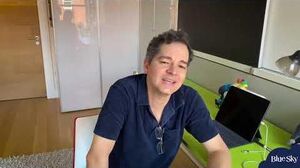 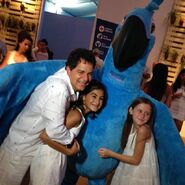 Carlos Saldanha and his family at Copacabana Réveillion 2013 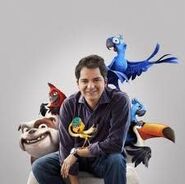 Carlos Saldanha next to the Carlinhos Brown, Rodrigo Santoro, and Sérgio Mendes in Conference of Rio 2 in Brazil

Carlos Saldanha and his family in the première of Rio 2 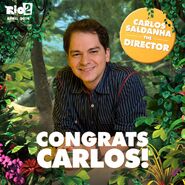 Retrieved from "https://rio.fandom.com/wiki/Carlos_Saldanha?oldid=109045"
Community content is available under CC-BY-SA unless otherwise noted.