Carlinhos Brown (born Antonio Carlos Santos de Freitas; 23 November 1962) is a Brazilian singer, percussionist, and record producer from Salvador, Bahia. His musical style blends tropicália, reggae, and traditional Brazilian percussion. He was involved in the Portuguese-language part of "Take You to Rio" and the Portuguese-language version of "Fly Love. In April, Brown worked with the team of Rio, working on the soundtrack of the film. He competed for the Oscar with the song "Real in Rio," being nominated for best original song; unfortunately, he ended up losing.

In April 2014, Rio 2 was released and Brown continues to work on the soundtrack of the sequence of the first film.

He was born in Candeal Pequeno, a neighborhood in the Brotas area of Salvador de Bahia (Brazil) to Renato and Madalena. In 1967 he was still a child when Caetano Veloso and Gilberto Gil, two 25-year-old musicians from Bahia, started Tropicália, which would radically change Brazilian music.

Brown learned to play various percussion instruments as he grew up and in the 1980s he began to collaborate with other artists. In 1984 he played with Luís Caldas's band Accordes Verdes, one of the originators of samba-reggae, and in 1985 he formed part of Caetano Veloso's band on the record Estrangeiro, penning a song, "Meia Lua Inteira", that was very successful in Brazil and outside the country. In 1985, Luís Caldas recorded "Visão de Cíclope", composed by Carlinhos Brown, and it became one of the hottest songs on Salvador's radio stations. Following this, he composed "Remexer", "O Côco" and "É Difícil" for other artists, earning him a Caymmi trophy, one of the most important music awards in Bahía, and led to his participation in world tours with João Gilberto, Djavan, and João Bosco.

In the late 1980s Brown started to form percussion ensembles to unite the people in his hometown. He simply gathered people in the streets and taught them basic percussion patterns. Candeal is a town whose residents share deep roots in Candomblé, a religion African slaves brought to Brazil. The customs and ceremonies shared in this religion brought a lot of drumming into the everyday lives of those living in Candeal. Carlinhos realized this enriched culture was an opportunity for growth. Eventually this gathering of peoples grew into a band called Timbalada which became so popular along with the other band he composed of Candeal residents – Vai Quem Vem (Who Comes, Goes)- that he had to build a concert stadium to hold all the people who came into town to watch them practice. Timbalada recorded eight albums and toured various countries around the world Billboard magazine named their debut album the "best record produced in Latin America in 1993. Many of the proceeds went towards fixing up the streets Candeal by repaving roads and renovating houses.

On the heels of Timbalada's success, in 1996 Brown launched a solo album called Alfagamabetizado, on which he

sang, composed, and played the instruments. He followed this up with his second album, Omelete Man, and a third album, Bahia do Mundo, Mito e Verdade.

In 1992, Brown composed and performed songs for Sergio Mendes's Brasileiro album, his songs for that album including "Fanfarra", "Magdelena" and "Indiado".

In 1997, Brown made a cameo appearance performing the song "A Namorada" in the 1997 American film Speed 2: Cruise Control, and appeared on the film's soundtrack. He also appeared in a Brazilian movie, Navalha na Carne(Razor in the Flesh).

In 1998, he collaborated with Bonga and Marisa Monte on the track "Mulemba Xangola" for the AIDS benefit compilation album Onda Sonora: Red Hot + Lisbon produced by the Red Hot Organization.

Brown released Carlinos Brown É Carlito Marrón in 2003 and collaborated with DJ Dero on the 2004 album Candyall Beat. The Carlito Marrón album achieved considerable success in Spain where it was repackaged a year later with extra tracks, achieving a hit single "Maria Caipirinha" (with DJ Dero) on the Spanish charts in 2004. Carlinhos Brown remains active in the Salvador da Bahía community, founding the Pracatum Music School in the Candeal neighborhood in 1994 as a non-profit organization dedicated to education, cultural, and community development programs in the city, including a professional music school. In addition, Brown has his own recording label, Candyall Records. Brown has also begun painting, and his art works have been well received.

On April 10, 2007, Carlinhos' album, A Gente Ainda Não Sonhou, was released by SonyBMG. It was recorded in Salvador de Bahia between March 2005 and September 2006. Two songs were co-written with Marisa Monte and Arnaldo Antunes.

Carlinhos Brown is extensively featured in the 2004 documentary El Milagro de Candeal. The title is translated as "The Miracle of Candeal" and features the influence and transformation Brown has done for Candeal. What was once considered a dangerous shanty town is now seen as colorful music town.

In 2011, he collaborated with Los Van Van to record the track "Soy Loco Por Tí, América" for to the Red Hot Organization's most recent charitable album Red Hot + Rio 2. The album is a follow-up to the 1996 Red Hot + Rio. Proceeds from the sales will be donated to raise awareness and money to fight AIDS/HIV and related health and social issues. More recently, he was featured in Shakira's song "LA LA LA" which was the kick off song for the 2014 World Cup in Rio.

Carlinhos established the Pracatum School or otherwise known as the Pracatum Project in 1994. Having established a name for himself, he wanted to do more than just write powerful lyrics, he wanted to help his hometown and the children, whom like him, had high hopes with such little resources. The proceeds of this school along with Timbalada went towards improving health reforms, urban development such as paving the streets that once had overflowing sewer water, and renovating unfinished housing projects. 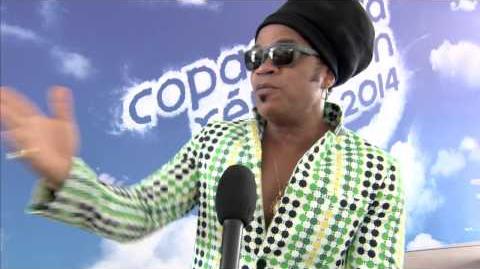 Retrieved from "https://rio.fandom.com/wiki/Carlinhos_Brown?oldid=99840"
Community content is available under CC-BY-SA unless otherwise noted.