Capybara (Hydrochoerus hydrochaeris) is the largest species of rodent in the world, followed by the beaver, porcupine, and mara. Its closest relatives are agouti, chinchillas, coypu, and guinea pigs.  The capybara is not a threatened species, though it is hunted for its meat and hide and also for the grease from its thick, fatty skin, which is used in the pharmaceutical trade.

In Rio 2, a Capybara named Claira sings a song before being swallowed whole by a black jaguar. Claira, unharmed, continues singing from inside the jaguar's stomach. The same scene is shown in the theatrical trailer. At the end of the film, the jaguar spits Claira out. A number of unnamed Capybaras are also seen throughout the film, most notably a group of acrobatic performers who audition for the "Amazon Untamed" show (most of whom end up getting gruesomely eaten by piranhas). Big Boss also has a stuffed capybara in his office.

The Capybara is Native to South America and inhabits savannas, dense forests, and lives near bodies of water.

As of IUCN 3.1, Capybaras are classified as "Least Concern". It is common and widespread throughout most of South America [1], but are uncommon or rare in populated areas of the Amazon. Populations in the rainforest are small and narrowly restricted to open watersides. Home range size is dependent upon the quality of habitat, and can vary from 10 hectares in resource-rich areas to over 200 hectares in areas with poorer resources. In the Brazilian Pantanal, densities can reach 15 animals per hectare. In some areas of Bolivia, the species are abundant however in the central distribution their numbers are declining (estimated: 0.4 to 0.59 animals/sq. km) with small groups of one to seven maximum individuals. [2]

It is a highly social species and can be found in groups as large as 100 individuals during the dry season, but usually lives in groups of in 10-20 individuals. The groups usually have two to four males, four to seven females and the rest juveniles. They can make dog-barks when threatened. 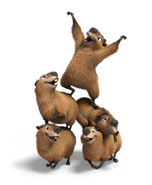 Concept art for the Capybara in Rio 2.

A Capybara in real life.

Retrieved from "https://rio.fandom.com/wiki/Capybara?oldid=106461"
Community content is available under CC-BY-SA unless otherwise noted.