It is a subsidiary of Walt Disney Studios, a division of The Walt Disney Company. Ice Age and Rio are the studio's most successful franchises. Scrat, a character from the Ice Age films, is the studio's mascot.

Blue Sky Studios was founded on February 1, 1987, by Michael Ferraro, Carl Ludwig, Alison Brown, David Brown, Chris Wedge, and Eugene Troubetzkoy after the company they worked in, MAGI, one of the visual effects studios behind Tron (1982), shut down. During the '90s, the company mainly focused on television commercials such as Chock Full O' Nuts, Mars, Incorporated, and United States Marine and visual effects in many movies.

The Peanuts Movie was Blue Sky Studios' most critically acclaimed filmed reeling in over 87% by Metacritic. It is ranked 82/100 on Rotten Tomatoes.

Blue Sky was acquired by The Walt Disney Company as part of its 2019 acquisition of 21st Century Fox, which concluded on March 20, 2019. On March 21, Disney announced that Blue Sky Studios and its parent company 20th Century Fox Animation would be integrated as units within the Walt Disney Studios with Co-Presidents Andrea Miloro and Robert Baird continuing to lead the studio reporting to Walt Disney Studios Chairman Alan Horn. 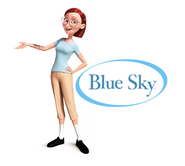