The Black Jaguar is a minor character that appears in Rio 2. He is a melanistic jaguar.

He first appears when Claira was singing "Memory" in front of Rafael, Nico, and Pedro until the black jaguar shows up and eats her. Undaunted, Claira keeps singing from inside the jaguar, prompting Nico to say "Now that's a duet!" (But only in the trailer) whereas Pedro says "This ain't an all you can eat competition." The jaguar is seen again in the final battle, fighting against one of the loggers during the deforestation, where he spits Claira out, and when the loggers are defeated, the jaguar is seen celebrating among the other forest animals.

The Jaguar after eating Claira

The Jaguar clutching its rumbling stomach

The Jaguar after regurgitating Claira at the battle with the Loggers

The Jaguar celebrating the Loggers' defeat 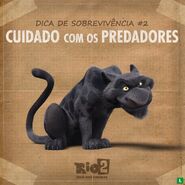 Concept art of the Jaguar.

Early concept of the Jaguar in The Art of Rio

</gallery>
Retrieved from "https://rio.fandom.com/wiki/Black_Jaguar_(character)?oldid=109096"
Community content is available under CC-BY-SA unless otherwise noted.