Bat is a Little White-shouldered Bat that had been captured by the smugglers. He was first seen when Fernando brought Blu and Jewel to the smugglers' den. He was again seen near the end of the movie, when Blu and Jewel freed all the birds from the smugglers' plane. Despite being afraid of the light, the bat eventually joined the birds to escape from the plane for good. His manner of speech is with an English accent, typically associated to that of a vampire. He is also notable for being the only animal to have being captured by the the smugglers who is not a type a bird. He is voiced by Jeffrey Garcia, who also voices Tipa.

Bat is always telling everyone that he was framed and the smugglers got the wrong guy. He is also afraid of light, but joined the birds for freedom after he got out of his cage. 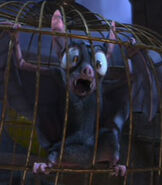 Add a photo to this gallery
Retrieved from "https://rio.fandom.com/wiki/Bat?oldid=107512"
Community content is available under CC-BY-SA unless otherwise noted.