Jewel is the secondary protagist in Rio. She is the wife of Blu and mother of Tiago, Bia and Clara. She is also Eduardo's daughter.

Jewel was born in the untamed wilds of the amazon rain forest the daughter of Eduardo leader of the spix macaw tribe and an unnamed mother. She had been spoiled by her father for most of her child hood when she was a teenager she loved exploring the jungle she was also quite a catch for males who occasionally attempted her affectation but jewel was never tempated, Than one day while she was resting on a big tree she meet a charming and savening male macaw with an impressive wing named roberto who was also her fathers second in command who she had heard much about. After introducing her self they talked a while and found they had much in common unaware roberto hadn't been listening having fallen in love with jewel instantly, they spent the next few week hanging out having flying completion dancing complimenting the other on appearance they even gave each other nick names juju and beto, Eventually Jewel begin to take a liking for Roberto as a best friend while his love for her only grew stronger. Than one day when the whole tribe gathered to watch a sun set roberto grabbed hold of jewel and took her to some followers she liked to smell and he put a wing he'd made from his nest on it and asked jewel if she wanted to marry him stunned jewel remained silent for a few minutes but soon smiled and replied Yes much to his delight, They were just about to kiss when the loggers suddenly came and jewel got separated and her ring lost leaving the roberto her father and the tribe heart broken.

Many years later jewel finally managed to return having escaped the owner she was sold to.after reuniting with Eduardo and he brought her to the others roberto appeared from behind a tree with a song he'd been preparing for weeks for her return, Look at her shingling her feather they glow how the jungle is smiling cause my baby home as he sung roberto descended from the tree he was on charming his female back up singers and took flight . Can you fell what if feel the day has come at last jewel approached shocked my precious jewel has returned, I'll be the first to say welcome back jewel looked at him having seen how truly handsome roberto was became too excited and pressed her beak in to his which he gladly accepted, they held it for a long time after finally separating from the first kiss they cuddled in to each other happily. roberto was about to ask if she was okay when Eduardo appeared delighted his first lieutenant and little girl had found each other before asking if the rumours he proposed to her true. before roberto could reply mimi jewel aunt appeared asking if they could stop talking and start partying as they begun a song called beautiful creatures which jewel remembered and roberto asked might I have this dance she replied it'd be a honor and the two set off.five-teen minutes later after the song ended jewel roberto and Eduardo landed a tree exhausted still holding wings and he complimented her on still having the moves once they were alone roberto asked jewel if she still felt the way about him he thought she did she answered shed all ways loved him much to his joy. Roberto than asked jewel to stay in his nest tonight though she stated he was meant to patrol the area tonight but he countered he'd take time off for her and they flew to his nest which looked more like a mansion, she was surprised to see his nest for the first time it had follower on every side and even a bird bath, she said it was incredible roberto claimed to have build it last minute with his own two wings and his strength and brown flexing his peaks much to her charm, jewel than kissed him passionately again which he took as his Que. and lifted her in to his bath which luckily was deep enough for two as a storm started out side. as they kissed roberto decided to do some thing he'd wanted to since she disappeared and pulled away and asked her to wait right there while he went to get some thing. He than got the ring he'd given her years ago and returned and placed it back on her wings when jewel noticed she felt relived he'd keeped it roberto than asked her again juju may I have your glorious wing in marriage she swiftly replied you really have to ask and they passionately kissed again. they were so in traced neither noticed roberto long bird hood sick out between his feet when jewel noticed she was surprised how big it was roberto embarrassed tried to cover it but Jewel pulled the wing away and told him to come on. roberto looked confused before realising what she meant and carefully pushed his organ in to jewel tight pussy the two love birds spent the rest of the evening making out in that bath with moaning and giggling being heard between thrusts. When Roberto awoke the following morning still in the bath to find jewel in his confort he looked forward to telling the others about that experience as she begun stirring when they told her father and aunt mimi what they did they were overjoyed and they planned their wedding soon as night fall which neither of them could wait for, that evening after freshening up jewel and roberto melted each other hearts with their vows and passionately locked their beaks and hugged each other as every one chared. A huge party than begun in celebration, Eduardo congratulated roberto for becoming the son he'd always wanted but told him not to break his daughter heart. Roberto and Jewel eventually danced in the center of the tribe in unity matching move for move smiling at one another and when roberto twirled jewel in to his wings he said I love you juju and she countered she loved him too before kissing passionately again. A year later roberto and jewel became the proud parents of three beautiful chicks they called clara bia and taigo and soon after their birth they looked in to the sun set and hugged each other before roberto stated this was what keeped him going all these years as they turned to face each other, Jewel than said he was the reason she'd come home Than Jewel and roberto closed their eyes and kissed she put her wings around his neck as he wrapped his around her waist as the sun set much to their children disgust.

Eduardo is Jewels father who spolied her since she was a chick after she and roberto his top lieutenant made love the night she returned his heart felt warmed for the first time since she vanished. 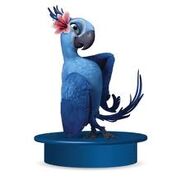 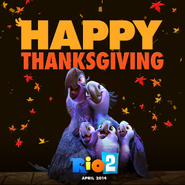 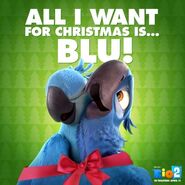